After meeting Jane Pappler at the British/American Specialty last summer,

invited to go to America. He was entered in a hunting test where they use

live ducks, Danita handled him. One of his first retrieves was a roughneck 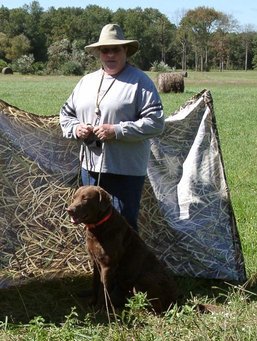 duck that bit him on the nose. Awesum is a gentle dog, he seemed to never

get over it, so he will never trust Donald Duck again.

We were convinced he wouldn't pick up live game anymore.

He came back just before Christmas, we started training again, only there is

very little hunting in Holland and if there is, there are more people than

game to hunt, so we were left to train with cold game. The trouble is dead

ducks won't fight back. What to do? Tracking could do the trick, the duck

isn't moving but his smell will. We made a track through wood and ended

picking the duck. Awesum started beautifully, made the corners and just as

he was supposed to be coming out of the border,

A big St Bernard came walking along the footpath and scared the ........ out

of him just as he was about to pick the duck. This is the end of his and

mine career as "a man and his working dog" I was so sad.

The Winners Dog Show in Amsterdam was held in November, we had nothing to do

because of a duck so we decided to go. We met Janet Morris, who we told

about the duck, she very quickly invited us all to come to Wales and make

him forget. If all the answers were so easy, we said yes and the trip was

planned. After a very rough ride over the channel to Harwich, we arrived

late at night at Black Beech Farm. With very little sleep we were up early

Estate. Meeting the local handlers who made me look like a city slicker but

gave me very warm welcome and a handful of blue strings? 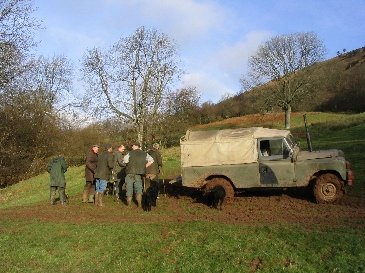 You take a dozen men and women, a lot more dogs, a very tiny pony-carrier,

shove them all in and off we went. Awesum never know what was coming, marked

the guns, but was astonished by a rain of pheasants. The second horn sounded

first. This isn't working, we are making a fool of our self's.

Working in water, that we could do, Holland the land of water and dykes.

never worked on fast moving water, the Usk was swollen with rainwater, he

never saw them floating past - dark birds almost under the water. Throwing

a stone could help him mark if he stopped looking at the stones. The second

stone did the trick and off he went, marking, swimming and retrieving. YES,

I do have a working dog!

Marking, tracking and catching runners like there have never been a stupid 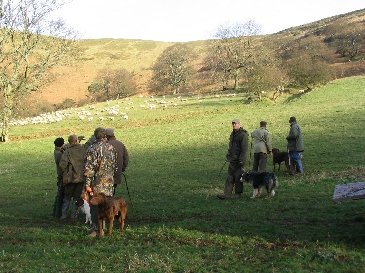 I even learned about blue strings and braces, male female pheasants,

beaters, bread with cheese and onions. We could climb the world.

Me and my big mouth. Hunting on the Black Mountains. In Holland we got hills

that looks like speed bumps comparing to your mountains. Me short of breath

because of lack of oxygen or condition, my dog jumping up and down wanting

more. Do you know one of your legs will get shorter because of walking along

the side of mountains. I know I am still limping because of that mountain.

Awesum only learned and learned

My dog is a top dog, now I must find a person who can keep up with him. I am

exhausted but happy. We came home with lots of memories, photos, pheasants